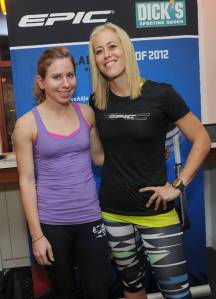 There are a lot of perks to working at my job.

For one, I am the token female of the company. Some may say that’s a bad thing—but I don’t think so.

For one thing, any women-oriented merchandise that enters the office is immediately mine. Also, there’s no weird female competitiveness (read: bitchiness) that I know goes on and have experienced in a women-dominated office. Plus, the guys I work with are awesome, totally laid back, and invite me to drink whiskey with them after a hard day.

(Okay, one downfall: Sometimes I have to pretend to like whiskey).

One of the coolest things about my job though, is that I get invited to try new and different workouts from time to time. On Tuesday, I got the chance to workout in the Empire State building (how many people get the chance to do that?) with celebrity fitness trainer and motivator Lacey Stone. She’s worked with Amanda Seyfriend, who’s been in a movie with Channing Tatum, and to me, that makes her awesome.

Not only did I get a chance to work out with Lacey, learn about and try Dick’s Sporting Goods new line of EPIC Treadmills, I also got the chance the chance to take a jog around Scotland.

Using Google Map technology, these EPIC treadmills allow you to pick from several routes around the world—such as, say, Scotland—and do a run that mimics the elevation and terrain of the course. The treadmill screen gives you a Google Street View video of the route you’re running, so it’s kind of cool to watch as you chug along. I got to venture all the way up to an 8.0 elevation, all the way down to a -3.0 decline. And by got, I mean, the treadmill made me do it. I would never pick such a crazy incline by myself.

These treadmills also have built in Wi-Fi capability, so you can surf the web or update your Facbeook status mid-workout, which they emphasized… but all I could think about was how I could use my HuluPlus account on it to catch up on Pretty Little Liars or SNL during a run.

There was a chance to win a treadmill, which unfortunately I didn’t win, but I did win the fastest mile time in my group (we had four groups of 4-5 and did a floor workout with a medicine ball and step while we took turns on the machines). I’m still feeling the burn from the squats Lacey made us do—but since I don’t have the willpower to always make myself do them, I’m glad she gave us some motivation. I also went all out in our plank competition, and held one for over two minutes, something I haven’t attempted to do for awhile.

While I don’t particularly love running on treadmills, I like the capabilities these EPIC Treadmills have because they counter most of the complaints I hear and hold myself about treadmills in general. The main reasons I prefer the road to a machine are because I get bored and a machine doesn’t mimic the elevation of the road. These treadmills provide entertainment (WiFi and/or the Street View) and give you the ability to mimic actual road routes, which is awesome especially if you are training for a longer race like a marathon during the winter.

The snowy, rainy, slushy season is approaching quickly—so if you’re looking for a new treadmill to help you survive the winter months, I’d say splurge and invest! It’s like the iPhone 5 of treadmills.

I’ll be posting a treadmill workout from Lacey Stone shortly—so if you really want to get a good old fashioned butt kicking, stay tuned.