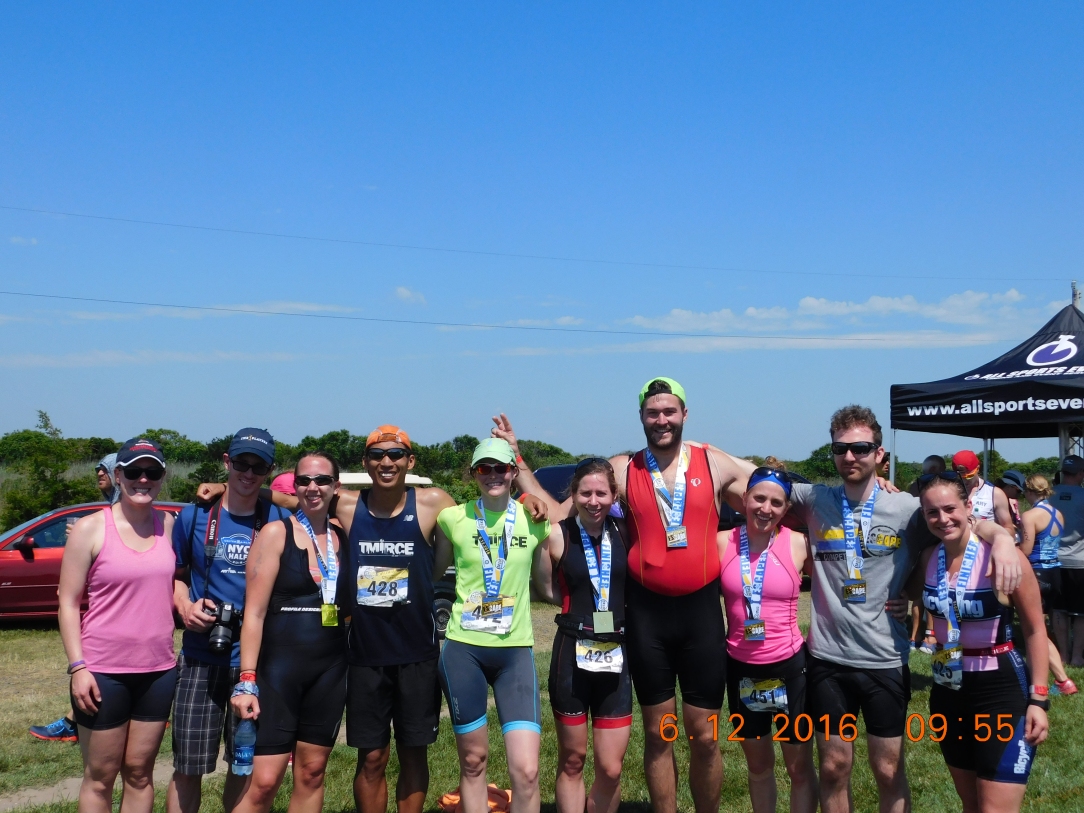 When I found the listing for Escape the Cape, the fact that it was held in the town where I grew up spending my summers cinched the deal: I had to sign up.

I rarely plan in advance for anything. It drives my mother crazy. Hell, sometimes it even drives me crazy! I often find myself shoving god knows what into my suitcase 5 minutes before I absolutely need to leave to make whatever mass mode of transportation I am taking to get to my destination, forcing the zipper shut and rushing out the door before realizing 10 minutes, 20 minutes, or hours later, that I’ve forgotten a few essential items.

This past weekend, I forgot to pack a bathing suit in preparation for my travels. Which wouldn’t be a huge deal – if I wasn’t going to the beach. Yet nine months ago, I actually did think to plan ahead. And not for a big anniversary party, friend’s birthday or work event: It was for a triathlon. Duh. 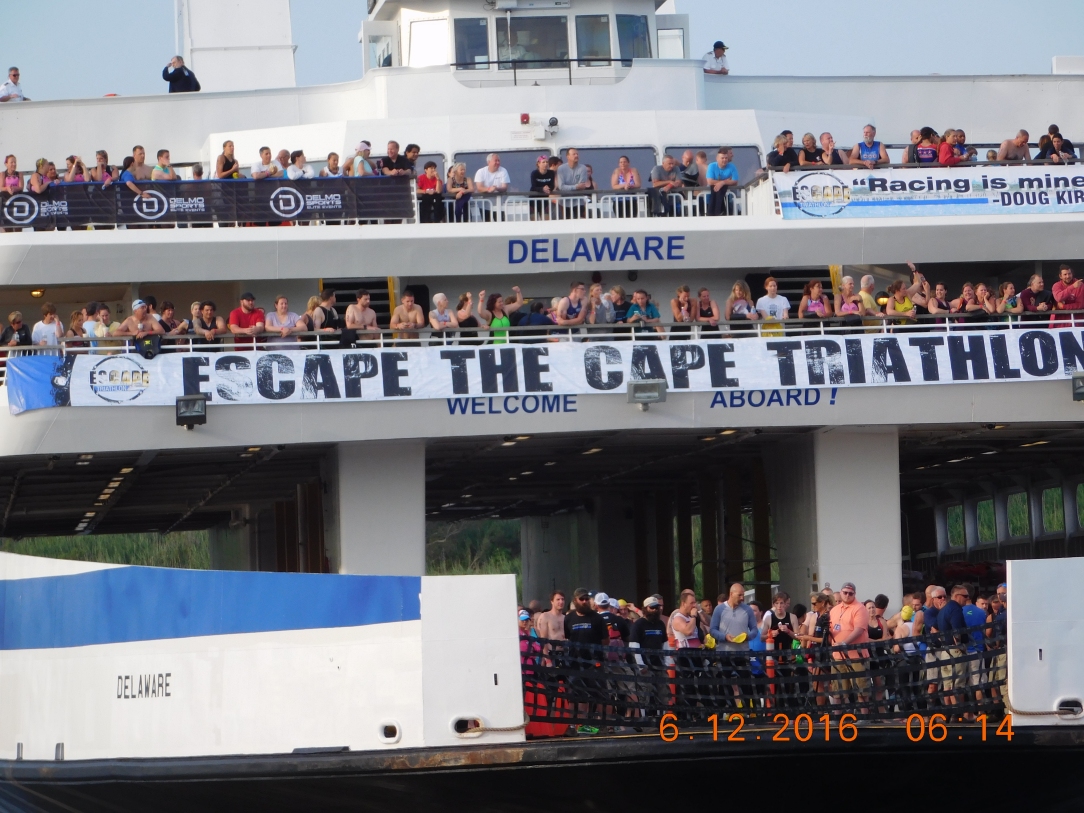 I first heard word of the Escape the Cape triathlon — a sprint and international-distance event that begins with participants leaping off the Lewes Ferry in the open waters of the Delaware Bay — when I was doing my due diligence and searching for triathlons to sign up for during the 2016 season. I was riding a high from finishing the Lake George Half Ironman over Labor Day weekend, and was eagerly looking for my next endurance event.

When I found the listing for Escape the Cape, the fact that it was held in the town where I grew up spending my summers cinched the deal: I had to sign up.

The website said the event had sold out in less than 24 hours the year before, so I quickly marked my Google calendar, asked my mother if a group could inhabit our family’s house in Cape May Point for the weekend, and sent out an email to some friends asking if they’d like to join.

It’s probably the farthest out I’ve planned for a race, even though I’ve been running the Boston Marathon consecutively for the past three years. But hey, what do you know! The planning paid off: the weekend was overall a success. I couldn’t have asked for a better group to compete with, and my sister and her boyfriend were our official “race supporters,” shuttling us to and from the check-in area and even doing some grocery shopping for us, which helped immensely.

(The only thing that wasn’t great in advance was getting marked with our numbers and ages via a permanent marker (common for triathlons) the day before the race. Between sunscreen, sweat and spending time on the beach, we got marker on everything and none of our markings lasted through the next day.)

Now, for the race recap:

I finished third in my age group of the International distance race (a 1-mile swim, 23-mile bike and 5-mile run), and felt strong for most of the race – omitting the 1-mile swim from the ferry to the shore. While I’ve swam in open water before, tackling the ocean is an entirely different beast. I had been having so much fun on the boat with my friends (we loaded more than an hour before jumping, leading our group to joke around, dance, and basically forget we were there to actually race) that I literally didn’t think much about my swim strategy until took my first breath of air after jumping off the boat. When I reached the surface, I found myself in an abysmal of waves and cries for help (some individuals couldn’t handle the open waters and were brought safely ashore via jet skis occupied by Cape May Beach Patrol crew members). The water was choppier than I’d ever seen it before, and the corresponding waves made it difficult to swim freestyle without receiving a mouthful of saltwater during every breath. I was intimidated, and even thought a few times that the race was over for me already. So I must admit – I did a lot of that swim on my back, kicking my legs and paddling with my arms like someone just learning how to swim. BUT once I reached the beach, I kicked things up a notch and got back to business.

My first transition went smoothly, and I was up on the bike in no time. Going into this race season, I was confident my weakest leg was the bike portion of the race, but I felt strong and in control the entire route 23-mile route. The mostly-flat course was a familiar one, and while there were some sharp bends and turns, I was proud of how I handled myself. The one hill on the course – a bridge – was where I was able to really turn things up. Luckily (for me), we went over it four times.

My second transition also was fairly smooth, thanks to the lock laces I “installed” on my sneakers the day before. I knew the run would be flat, and I was excited to finish the race with my strongest sport. Yet I didn’t realize there would be four stretches of beach runs over sand, which significantly stunted my pace.

But I didn’t let it discourage me too much.

Seeing my friends (those still on the bike course, and those ahead of me during the run) and family (who were watching along the course) and getting some high fives along the way really helped me push through to the finish.

Once past the finish line (and once I caught my breath), I eagerly made my way back to the finish chute to watch my friends finish. While we were all able to cross the finish line, that doesn’t mean the race went off without a hitch — our group experienced a flat tire and a bike crash, but no one let these setbacks completely ruin their race or experience.

While I learned a lot during the race — like, my bike skills are definitely improving, but I need to seriously work on my open water swimming…and I need to push myself harder during my strongest sport, the run — the best part was just being able to share a fun weekend with likeminded people who were down to have a good time both before and after the race. Is that corny or what?

We indulged in many beers, chips, and pulled pork to celebrate our wins. While I left the beach with dead legs, I also left with a good feeling about what’s to come in my triathlon future. Is ‘triathlon future’ a thing? I’m making it a thing.

Until next time, maybe see you on the road, in the pool, or on Twitter.

(PS – shout out to my dad for most of these pictures.)