By idratherbestrongthanskinny in marathon training, race recap, running on November 22, 2016November 23, 2016
One comment

I still haven’t posted about Ironman Maryland, and that’s not because I don’t have a lot of thoughts about it. I have so many thoughts and feelings about October 1, 2016, that it has been hard for me to put them into words. But you can rest assured knowing that you will have something to read about it before the end of 2016. Pinky promise!

The road to the ironman wasn’t an easy one. When it came time to taper, my friends and I felt, admittedly, a little helpless. We had been dedicating hours every day to training, and most of our weekends were filled with eight hour brick workouts. Now, all we had left to do was trust our training had paid off, and wait. Which is way easier said than done.

So, what did we do? We signed up for a marathon.

The Philadelphia Marathon — held November 20, 2016 — is just under two months (50 days, if I calculated correctly, which I probably didn’t) after Ironman Maryland. According to my friend Chris, the marathon was the perfect opportunity to recycle our triathlon training efforts and (potentially) PR.

His “logic” made sense. It was early September, and the ironman was less than a month away.  I registered without blinking at the $100 registration fee (we found a coupon code).

I didn’t really think about the race again for weeks. Since my body was giving me so many issues post ironman and I couldn’t seem to stop eating like I was training for two hours a day, I wasn’t excited about the prospect of running 26.2 miles. My shins hurt. I felt out of shape, a couple pounds heavier, and sluggish. What I was excited for, though, was a much-needed escape from the city with a few of my best friends.

So I went ahead and helped planned the weekend, not giving much thought to the actual race. Avoiding the inevitable is a terrific coping mechanism.

On Saturday night — after a fun-filled day of road tripping to Philly from my parent’s house in NJ, hitting the race expo, meeting our TMIRCE friends for lunch, and watching countless episodes of It’s Always Sunny at our Airbnb — my roommate texted me to ask how I felt about the race. I replied, “I don’t really feel like running a marathon tomorrow.” Either that, or it was, “I don’t really feel like I’m running a marathon tomorrow.”

I can’t remember, exactly. But both statements were true.

She reminded me that my body had been through a lot lately, I already had a BQ from the New Jersey Marathon earlier this spring, and I should just take it easy and enjoy myself. Though I’m notorious for not taking good advice, her words stuck with me. What did I have to prove?

We woke up to a frigid and windy race day morning, and I briefly reconsidered the race day outfit I had planned: shorts, compression socks, and a bright green t-shirt. I’d never worn shorts in a marathon before — was this really the time to start? I decided, for some reason, that it was. After doing the whole “race morning” thing — breakfast, coffee, multiple poops and attempts-to-poop, driving to the race, parking, walking through security, hitting up the port a potties, finding our corrals, etc., etc., etc. — it was time to actually run.

Starting out, I decided that I would take Laura (my roommate)’s advice. I’d go out conservatively and push it in the second half if I felt good. If I didn’t? Then I’d just high five all the little kids I could find (they give the best high fives), and try to LOL at funny race signs and enjoy myself. I aimed to keep my miles between 7:50 and 8:00 minutes, and I did a pretty good job of that within the first half. Unfortunately, my shins were hurting and my feet felt heavy within the first 5k. I groaned internally, thinking that this would be the opposite of fun.

I ran into my friend Chris (a different Chris, we’ll call him Chris #2) on the course around mile 5. We spotted my parents around mile 6, and climbed a few hills together before I realized we were going a bit too fast for my “plan,” and held back as he pulled ahead. Around mile 11, I started to feel pretty good. Once we passed our TMIRCE cheer squad at mile 15, I decided I was ready to push the pace a little.

I don’t know exactly when my shin pain subsided (or I just became numb to it) or when I stopped thinking that running a marathon was a terrible idea. But here’s what I do remember: seeing my parents three times along the course, high five-ing the TMIRCE cheer squad twice, laughing at a sign that read, “You are now entering the upside down” (a Stranger Things reference) at mile 14, spotting my friends who were also running along the course, thinking about how fast Chris #1 was probably running at the moment and feeling inspired (he ran a 3:09), cheering for the elites on the opposite side of the road, and doing something I’ve always wanted to do during a race — take one of those beer cups from a keg stop. I managed to take one big gulp of beer before throwing it to the side, like I would at any other hydration station. The guy I grabbed the cup from enthusiastically cheered me on, which made it all worth it.

I surprised myself by having gas in the tank to pull off a strong finish. I surprised myself even more by realizing that I had fun! The cherry on top was the 3:24:33 finish time, despite not running more than 12 consecutive miles since the ironman. (And I’ll be honest, those miles were run hungover.)

I will be the first to admit that I have been wallowing in a post race funk ever since the ironman that I just haven’t been able to shake. I’m disappointed that we didn’t get to race the full 140.6 miles, and I’m honestly just sad that the entire experience is over. This weekend was the perfect pick-me-up, reinvigorating my enthusiasm for my first love, running. I’m not done with triathlon, and I’m certainly not done with the ironman. But it’s comforting to know that a 26.2-mile footrace won’t get cancelled or shortened because of a little wind (okay, a LOT of wind) and will always be there for me … even if I do hate it sometimes.

This race helped me realize that sometimes, running smarter is better than running harder. And I think that will be something that will help me improve in the future. I also learned that I do not have a thigh gap, as I experienced some thigh chafing. I guess next time I will spring for longer, spandex shorts. But WHO NEEDS A THIGH GAP ANYWAYS?!

I’m ready to take a much-needed break before deciding what my next challenge will be, but the thought of trying for a PR in Boston has crossed my mind. 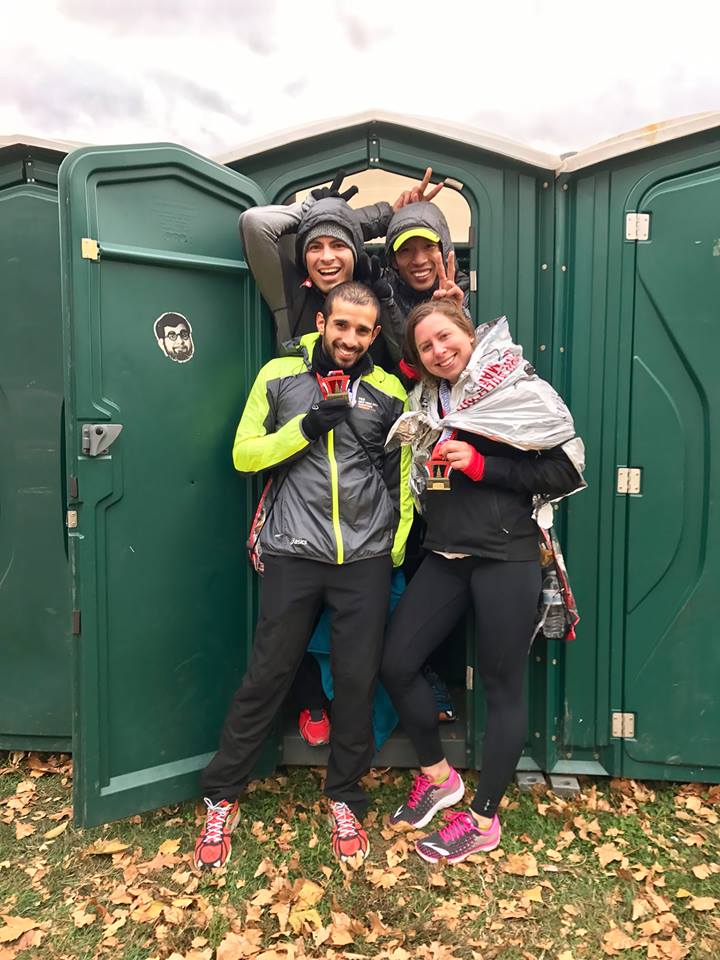