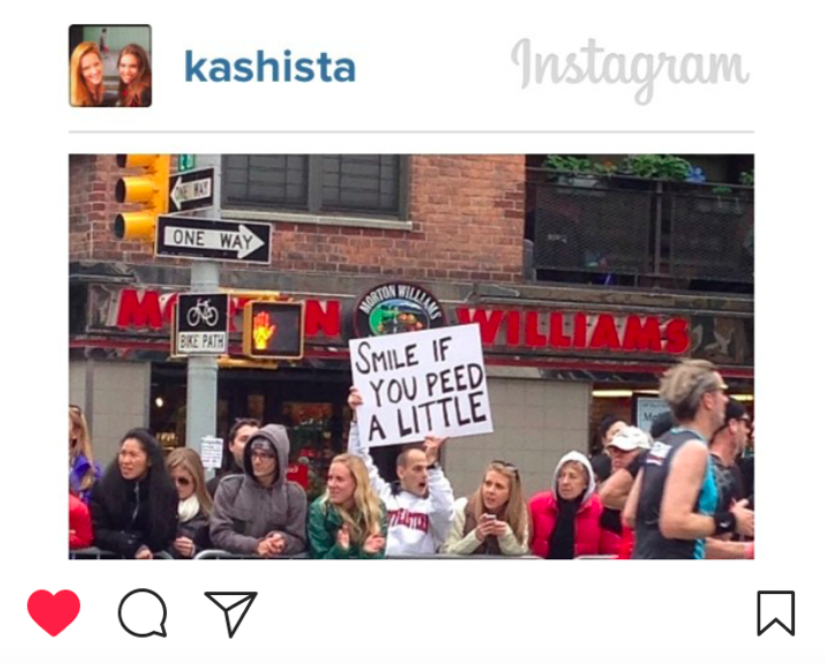 Sometimes fans think they’re being helpful, but their “motivating” cheers or race signs are actually mentally draining and deflating for runners. To help fans be the best support crew they can be, I polled my runner friends to see what they most enjoy hearing or seeing during a race.

By idratherbestrongthanskinny in marathon training, race recap, running, The Boston Marathon, The New York City Marathon on November 1, 2017
One comment

“If Donald Trump can run, so can you!”

If you’ve run a race recently, you might recognize these phrases from the signs held by spectators along the course. Crowd support is an incredible phenomenon, and as a longtime runner, I’m forever grateful to anyone who comes out and stands on the side of the road, rain or shine, for hours, just to watch me run by for 10 seconds.

But as much as I appreciate giving a swift high five to a, “Touch here for power” sign (it really does make me feel like I’ve just had a gulp of Space Jam’s secret stuff!), I get equally as frustrated with some spectators and their not-so-helpful cheers. For example, the guy who yelled, “You’re almost there!” to me at mile 11 of the 26.2-mile Boston Marathon this year made me want to fling myself off the side of the road.

I was fuming: Was this guy seriously watching this race without any idea how long a marathon is?! Did he not understand how far I still had to run?! My mood shifted from concentrating on the course before me (did you know marathons hurt?) to being furious with a stranger. It was depleting, and in a way, demeaning—though I know that wasn’t his intention.

The fact of the matter is: Sometimes fans think they’re being helpful, but their “motivating” cheers or race signs are actually mentally draining and deflating for runners. To help fans be the best support crew they can be, I polled my friends in The Most Informal Running Club Ever, NYC to see what they most enjoy hearing or seeing during a race.

Here are the best (and worst) things to say or do on the sidelines.

Ways to Be Helpful 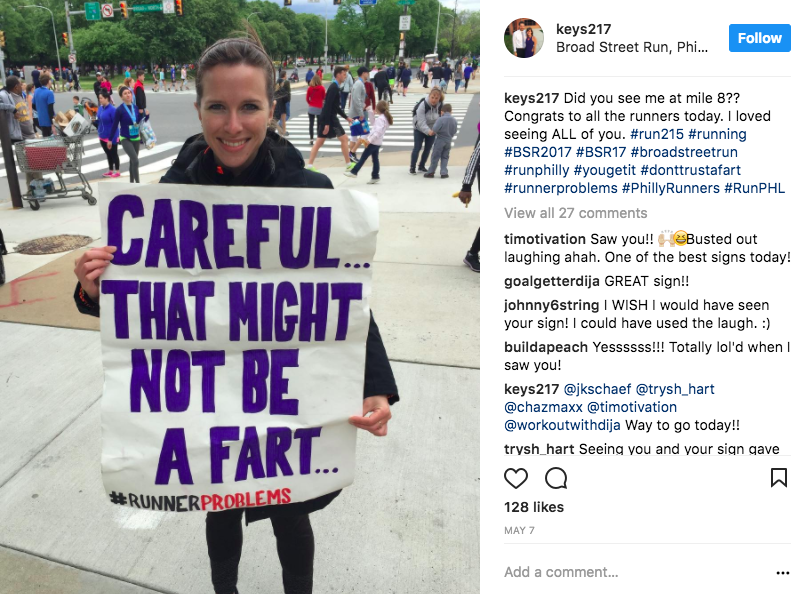 “I laugh at signs that say, ‘Don’t trust a fart.’” — Christopher Ho, marathoner

“One of my favorite things is hearing a personalized cheer, like when a spectator yells out my name, bib number, or a detail of my clothing. For example, ‘Looking strong, Chris/Bib no. 3457/blue shirt!’” — Ho

“For my first marathon, I put my name on my jersey in big letters as I had heard it would be helpful, but I didn’t expect much. I was surprised by how incredibly motivating it was to hear people shout my name, make eye contact, and encourage me to keep going. For a fleeting moment, you feel like there is a personal connection, and this stranger is now part of your cheer squad.” — Victor Tello, marathoner and triathlete

“During the Philadelphia half-marathon, a spectator was holding huge cutouts of a dog and a cat. Cute pets will put a smile on anyone’s face!” — Laura Van Lenten, half-marathoner and triathlete

Make it a group effort.

“I love to laugh in a race. During one race I saw three friends lined up with sequential signs reading, “Go Harder!” then ” Go Faster!” and then, “That’s What She Said!” — Joshua Young, Ironman finisher

“I like hearing people cheer about form, like ‘Take deep breaths,’ ‘Relax your shoulders,’ or ‘Drive your knees.’” — Ho 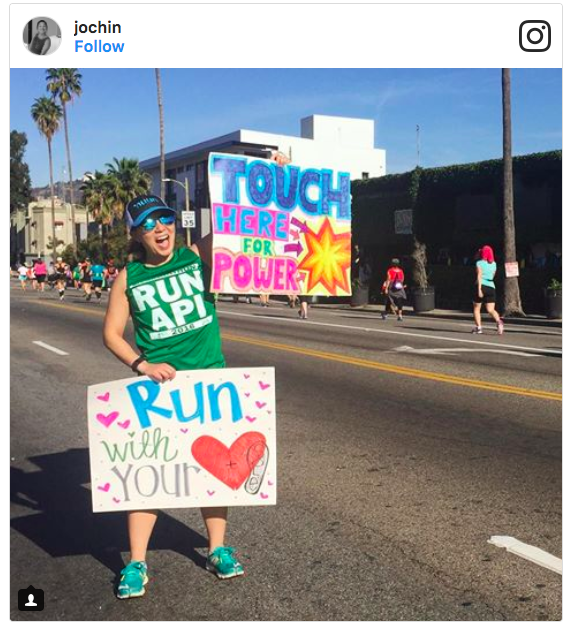 Go for an interactive element.

“I try to high five and touch all the ‘Touch here for power’ signs. I love those people!” — Katie Topalian, marathoner and TMIRCE member

“I try to never turn down a free high five from a spectator. Sometimes it’s that boost you need to reinvigorate your run.” — Erin Kelly, marathoner and Greatist writer

“I love people who cheer you on at the top of a hill and congratulate you when you’ve made it [to the top]. It’s the little goals that help move the race along.” — Lindsay Anne Michaels, runner

Ways to Be Discouraging (and, uh, Annoying)

Remind runners how much farther they have to go.

“I do not like hearing about distance at almost any point in the race because I either know already or would like to be pleasantly surprised [at the next mile marker].” — Ho

“In addition to the ‘You’re almost there cheer,’ there’s the reminder of ‘Only ___ miles to go!’ which is obviously just as bad and makes me want to punch whoever says it in the throat… but I don’t have the energy for that!” — Topalian

Have no clue what’s going on.

“During the Scotland 10K last year, one volunteer shouted, ‘Good job!’ just as I crossed the starting line.” — Blazer, half-marathoner

Let your “motivational” cheers come off as mean.

“There’s an older, portly fellow in the park who yells at my workout group in variants of, ‘Quit slacking!’ ‘Go get em!’ and, ‘Come on, you’re not even working, go faster!’ and I don’t like it. Self-control during workouts is really important, and it’s an active effort for me to tune out bad advice when I’m amped up.” — Seth Ariel Green, former collegiate runner

“Whenever my dad would come to my races in high school, no matter how fast or slow I was running, he would always yell, ‘You’re doggin’ it!’ I think he genuinely thought I wasn’t trying hard enough sometimes.” — Topalian

“At mile 10 in a half-marathon, a woman who had already finished the race yelled, ‘Let’s go, turtles!’ in a patronizing voice. Sadly, she meant slow runners, not the cool ninja kind.” — Pamela Kavalam, runner

“At mile 3 of the New Jersey Marathon, someone put a small table in the middle of the course with beer on it and a sign that said, ‘Take one.’ Genius, but a real d*ck move.” — Eric Jones, marathoner and triathlete

Give out false information.

“At the beginning of the Brooklyn half-marathon, someone at the top of the big hill in Prospect Park said, ‘It’s all downhill from here!’ While I don’t know why I thought it really would be 10 more miles downhill, I wanted to believe it. It was a rude awakening to find out the course wasn’t downhill, but flat with some rollers and way more difficult than that guy made it out to be.” — Mary Rose, half-marathoner and triathlete in training

Belittle the race itself.

“Signs that say ‘Worst Parade Ever’ make me think, ‘Then why are you here?’” — Kelly

This article was originally published on Greatist.